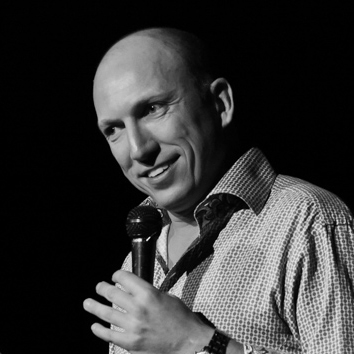 Called a “Canadian Master” by Just For Laughs, Dave Hemstad has skyrocketed to the top of the national comedy scene, appearing regularly across the country and on a hit show on CBC. Brashly confident on stage with clean, refreshing, motivational humour, Hemstad muses on daily life, modern world frustrations and social tensions we all experience, but keep to ourselves. Dave Hemstad has a half hour special on CTV called Comedy Now! He is a regular on the CBC’s The Debaters, and has been a guest on Connect with Mark Kelly and The Strombo Show. Hemstad has over 10 festival appearances—at the prestigious Just For Laughs festival in Montreal, at the Halifax Comedy Festival and the Winnipeg Comedy Festival. He has performed on CBC Radio’s Madly Off in All Directions. Hemstad is quite simply, a comedic genius. He was even voted Best Comedian in Canada by the Canadian Organization of Campus Activities. Not too shabby for a guy who only decided to be a comedian after (no joke) a bolt of lighting derailed his hopes of being a professional golfer. Hemstad’s hilarious deliveries, and ability to correctly read audience mood—adjusting his performance accordingly—make him a dream speaker or emcee for anyone looking for a light, intelligent, and clean (but not cheesy) comic. Hemstad is a fresh, hilarious comic with an incredibly bright future—preferably without more lightning strikes, of course.