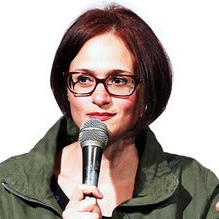 Adrienne is a comedian, writer, and performer based in New York. As a stand-up, Adrienne is a JFL New Faces alum. She won the first ever People’s Choice award at the New York Comedy Festival and made her debut on NBC’s Last Comic Standing. Her Degenerates Netflix special premiered on NYE 2020 alongside Nikki Glaser, Ms. Pat, and others. One of her jokes was featured in Netflix's Best of 2020 Stand-Up special. She has appeared on This Week at the Comedy Cellar, The Late Show with David Letterman, and Gotham Comedy Live on AXS TV. Adrienne wrote on What’s Your F@3King Deal?! with Big Jay Oakerson. She released her debut album, Baby Skeletons in 2020. It was met with high praise from fellow comedians Neal Brennan, Patton Oswalt, Chris Rock, Anthony Jeselnik and others. Baby Skeletons was named Interrobang's Top Eleven Comedy Albums of 2020.